Before the terms keto or ketogenic entered our dietary conscience, smoked salmon played a supporting role in diets around the world. Over the centuries, smoking was a common way to preserve and cure meat of any kind to prevent spoilage. The smoking process generally involves curing and partially drying out the meat. GoT fans could imagine the House of Stark highly regarding the smoked cured meats alongside their motto “Winter is coming.” With the scarcity of fresh food during the harsh winter months, smoking and curing meat was a necessity for survival.

Native Americans were said to have relied on smoked salmon in their diet with salmon being quite abundant along the coastal waters of America. In Greek and Roman history, smoked fish was often a dish eaten at celebratory gatherings. Throughout the Middle Ages, people incorporated smoked salmon as part of their regular diet.

In today’s world, smoked salmon is often regarded as a delicacy with choices ranging from the Pacific Northwest variety and the North Atlantic Scottish style to the Norwegian and burgeoning Chilean scene. It’s not something you eat every day, but incorporating smoked salmon in a canapé for a special occasion or a savory breakfast dish can make any eating occasion a memorable one.

According to a historical account on gourmetfoodstore.com, salmon is typically smoked when it is under 3 years of age to maximize the flavor and freshness. Smoking involves curing (salting) the fish. The majority of the commercial smoked salmon you buy at the store involves a wet cure, which involves dunking the fish in a salty solution (aka brine). The brine itself becomes a savory liquid concoction of salt, pepper, and spices. Following the brining process, the salmon is taken out to the smokehouse. The more popular “cold smoking” gives the salmon a more subtle flavoring vs. “hot smoking” which gives the fish a more intense smoky flavor and more desiccated texture.

On a recent trip to Geneva, Illinois, a famed Midwestern town known for its annual Swedish Days, we popped into a local hipster joint called Craft Urban, and I settled in for a nice weekend brunch of soft scrambled eggs layered with smoked salmon, heirloom tomatoes and spinach, garnished with slivers of pickled onions and snuggling with brightly beaded roe.  This beauty sat comfortably on two pieces of toasted bread. The eggs were “soft scrambled” so each bite of egg seemingly melted in my mouth with a flavorful piece of smoked salmon, roe, and tomatoes.

The meal was an even more memorable experience catching up with old friends and bouncing my niece on my lap.

When we got back home, I regaled over the yummy meal we had back in Geneva, and my hubs thought it best to whip up a lovely Sunday brunch at home, his way.  With his British roots intact, he opted for the Scottish Style smoked salmon (wild caught). From my understanding, the Scottish style smoked salmon has a smokier flavor than your typical Pacific Northwest varietal.  The Scots like to smoke their fish using oak. He picked up a small packet of smoked Scottish Style salmon at the local market, pre-sliced and perfectly portioned.

Gist of the recipe at home

He then whisked several eggs together with a little almond milk (due to our collective dairy sensitivities) and poured the egg mixture into a medium-hot pan. He scrambled the eggs and quickly turned off the heat while the eggs were still soft.

The key to a soft scramble is to keep the eggs constantly moving on the pan (lean into that wooden spoon or spatula). As soon as the liquidy mixture turns solid, remove the the eggs immediately from the hot pan. Leaving eggs in a pan will leave you with a hard scramble.

He then laid out the soft scrambled eggs next to the sliced smoked salmon, and sprinkled some thyme, dill, and cracked pepper. To give the smoked salmon and soft egg scramble a bit of tang, he added a dollop of lemon-infused hummus and whipped together a basic homemade salsa (pulsing a handful of roma tomatoes in a blender, combined with fresh garlic, a little lemon juice, olive oil, coconut sugar, and a tiny pinch of salt.  You can find a ready assortment of hummus from TJ’s, Whole Foods, or your local market.

He toasted slices of Udi’s Delicious Soft White bread (gluten free), buttered with soft Irish butter (keeping with the UK theme). Keeping it simple, we sat down to a delicious meal. The following are the ingredients, serves 4.

For those of you on a keto diet, skip the toast. 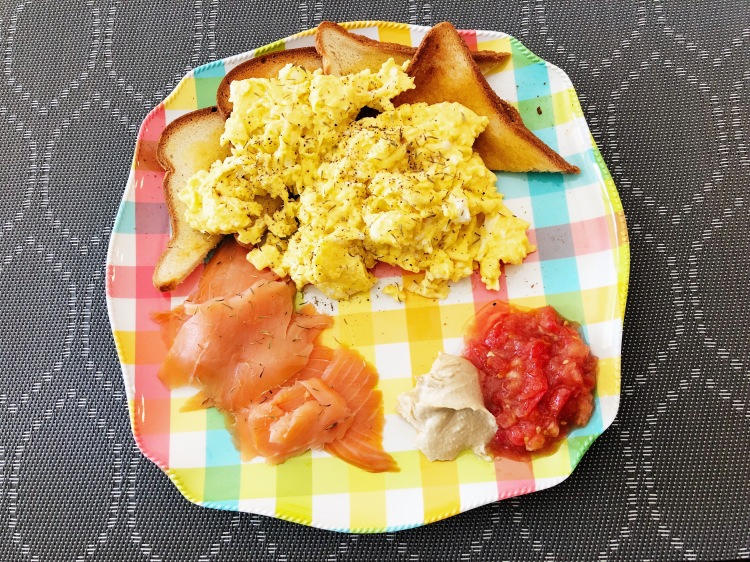